How to stop DPF filters blocking.

DPF filters blocking generally arise where city driving, excessive idling or light duty cycles are encountered. Or, if other engine components such as EGR valves, turbochargers, injectors are fouled or not working properly. DPF regeneration cycles then become more frequent, and more prolonged! And more serious!

DPF’s often need replacing at a cost of $5,000-$10,000, and in some cases, are not covered under new vehicle warranty! Excessive regens can dramatically reduce engine life, as it causes your engine oil to become heavily diluted with diesel fuel.

The solution is to assist the fuel to burn the soot at lighter engine loads. This is an approved method and one which fixes the actual cause of the problem. Remember that exhaust soot is a carcinogen, and it is illegal to remove or tamper with the DPF.

Your DPF works by filtering the soot from the engine’s exhaust stream. Essentially, if your engine is working under a reasonable load, fuel burn temperatures reach 550-600 C, and the soot is burnt during the combustion process. If not, it accumulates in the DPF.

By far the best approach is to reduce the temperature at which the soot particles burn, by adding FTC Decarbonizer to the fuel at each fill. This reduces the soot burn temperature to 350-400ËšCâ€¦a temperature readily reached by engines under even light loads. By acting as a true chemical combustion catalyst, the soot safely combusts clean up and keep clean the DPF.

To prove this, we recently took an Isuzu 4 x 4 All Terrain Warrior truck east-west across the center of Australia. The truck was new to us with 50,000 kms on the clock, when we left with FTC in the tank. During the first 2,000 kms, we noted two automatic DPF regenerations of 15-20 minutes, but after that regens were less frequent, and limited to 3-5 minutes each.

How to use FTC Decarbonizer DPF Cleaner 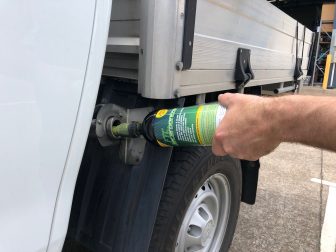 Step 1: Add a double dose of the FTC Decarbonizer into the diesel fuel tank when refueling. For badly blocked DPF filters this may need to be repeated for a second tank.

Step 3: For vehicles regularly driving in city conditions the FTC Decarbonizer should be added to each tank when refueling to avoid DPF Regeneration problem