How to remove engine oil sludge

“How to remove engine sludge is on the top of the agenda again” Engine sludge affects both petrol and diesel engines, and is surprisingly common. Engine Sludge is a gooey, tarlike deposit that reduces or shuts off oil circulation and can mean thousands of dollars to repair or replace an engine that has seized.

Sludge also directly causes oil consumption, power loss, high fuel consumption, oil pressure problems, hard starting, blow by and overheating. The problem is well recognized globally, by motoring authorities, and the mechanical servicing industry. In Europe, engine sludge is back to the top of the agenda again, for the first time in about 20years. Routine engine flushing has once again become the norm throughout both USA and Europe.

Most mechanics advise that sludge can affect almost any make of later model petrol / diesel engines and can cause extensive engine damage. Even high quality prestige vehicles have not been immune from the sludge demon with Lexus, Saab and Audi a few in that category. Globally, some 3.3 million Toyota engines have been sludge damaged, and Toyota have been involved in a major class action. Destroy these types of engines, and it’ll cost you $4000 to $8000.

We all know that oil is an engine’s life blood. If sludge prevents its flow, the result WILL be very expensive. Fortunately, there is a window of opportunity to remove accumulated engine sludge, before an engine seizes, and with regular, effective flushing the risk of further sludge damage can be avoided.

It is quite an easy DIY process to flush a diesel engine, and is as simple as completing an oil change. By following this easy 4 step process you will safely remove unwanted sludge and built up carbon, leaving the crankcase an “as new” clean.

Fortunately, CEM’s Flushing Oil Concentrate (FOC) makes the solution very cheap and so easy that anyone who changes their own oil can do it. FOC is formulated on purpose specific detergents which directly target normally persistent sludge and also heavy deposits of carbon that have accumulated, which can cause piston ring sticking and power loss. All these deposits are dissolved and suspended in the oil to be safely removed. FOC will literally restore pristine cleanliness to the engine crankcase. In most cases, one flush is all it takes. The 30 minute job is detailed belowâ€¦ 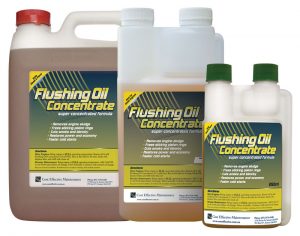